First, a former professor of Kwansei Gakuin University, Narahiko Toyoshita, gave the keynote address. He spoke about Okinawa’s US military base issues, the strengthening of military powers around the world as seen in the Sino-American rivalry, arguing that military expansion in itself was a menace, thus the necessity of Okinawa appealing for disarmament.

After that, Tsuyoshi Kitaueda made an appeal regarding the problems with the design of the Henoko landfill from the perspective of a civil engineer, and the serious environmental damage it will cause. Hideki Yoshikawa spoke of the example of the trial to protect the globally endangered species the dugong and of the necessity of appealing to the public opinion of those in Japan and the United States. Shoko Oshiro implored the effectiveness of utilizing the United Nations by citing their recent ruling regarding Britain’s forced expulsion of the population of Diego Garcia, an island in the Indian Ocean, and subsequent leasing of the island by the US military as a military base. Yukiko Toyoda spoke on how it is important to make known in the United States that with the changes in the state of affairs of the world, the meaning of the Japan-US Alliance has changed so that there are currently no merits to building the military base at Henoko.

Masaaki Gabe, a professor attached to RIIS and representative of the Society for the Study of Okinawa’s International Issues facilitated the event.

13 years have passed since a Japan-US agreement over the restructuring of the US military formed the plan to build a new airfield with a V-shaped runway at Henoko. In a changing Asia, due to factors such as the fluctuating order in northeast Asia because of North Korea’s nuclear weapons and the US-China economic rivalry, we will hold a discussion regarding Okinawa’s future and a develop a plan to resolve problems.

【Date】
Saturday, May 18, 2019 from 5:10 pm to 7:45 pm
【Place】
The Auditorium of the Okinawa Prefectural Museum & Art Museum
【Sponsored By】
The Society for the Study of Okinawa’s International Issues
【Cosponsor】
Research Institute for Islands and Sustainability 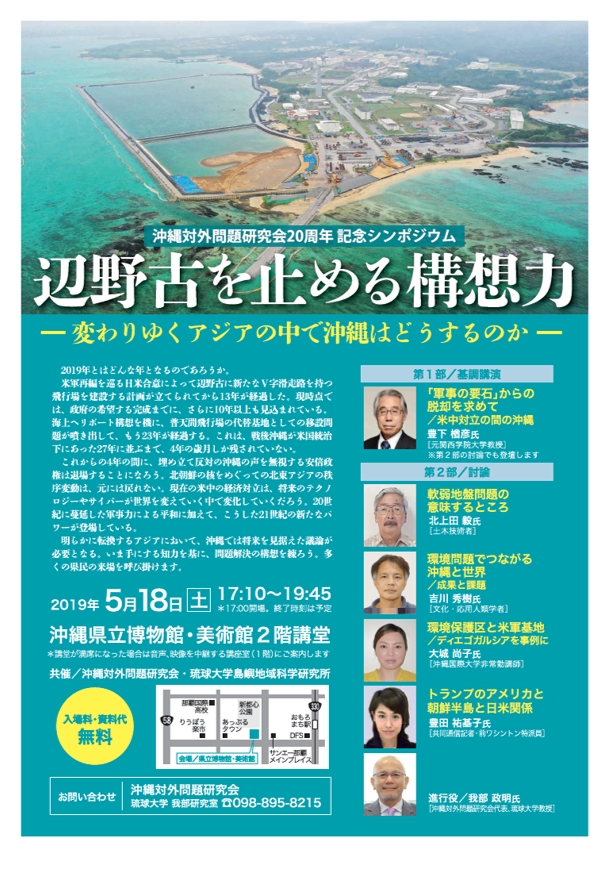